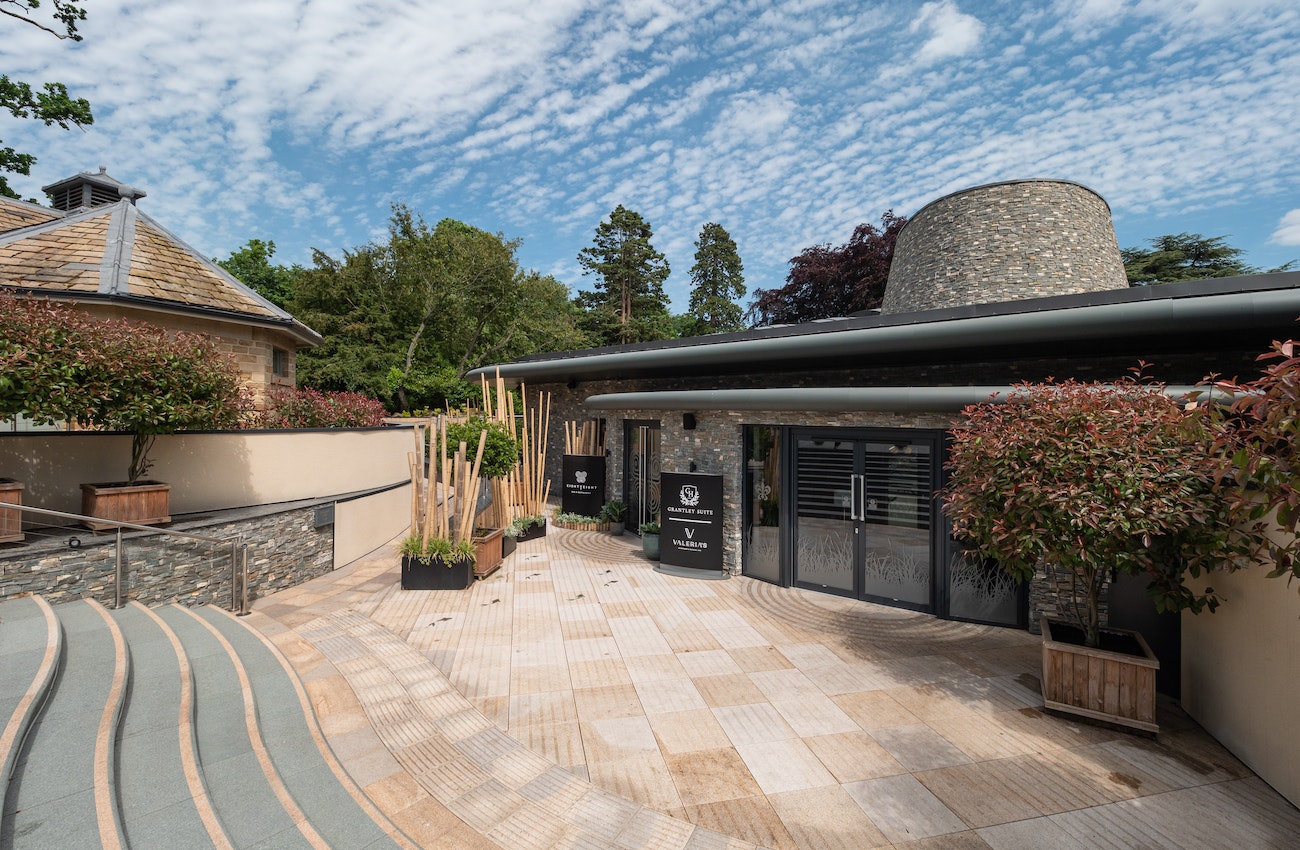 Located near Ripon in North Yorkshire, Grantley Hall’s past is colourful and varied with a myriad of tales to tell from Members of Parliament, artists, entertainers and royalty who have all walked through its doors. Originally built as a private home in the 17th Century, Grantley Hall has seen use as a shooting lodge, a convalescent home during the Second World War and an adult education college.

Today, Grantley Hall is privately owned by Valeria Sykes, who bought the property with a vision of creating a legacy for her family and the historical building. In partnership with Bowman Riley Architects and Main Contractor HACS Construction, the property, complete with a lake and English heritage Japanese garden, experienced a four-year restoration and modernisation plan.

The 47-bedroom hotel now features a state-of-the-art luxury spa, exclusive training facilities and three restaurants, including the signature restaurant named after its Michelin-starred head chef, Shaun Rankin. A new subterranean Garden Pavilion, clad in STONEPANEL™ stone cladding, has also been integrated within the listed Japanese garden. Originally built in 1910, the garden has been restored to become one of the most important of its type in the country.

Grantley Hall is a shining example of how historic buildings can be successfully transformed, all while maintaining and celebrating the original features that make them special. Grantley Hall won the Heritage Award at the 2020 RICS Social Impact Awards, Yorkshire and Humber, and has reached the national finals.

As part of the historic restoration, two new bespoke buildings within the Grantley Hall estate gave the project architects room to explore innovative structures and material use against a historic backdrop. Nestled within 40 acres of magnificently landscaped grounds is the tranquil Japanese Garden, with a stream bisecting a man-made ravine amidst maple trees, ferns and bamboo. Designed to sit perfectly alongside this natural setting is Grantley Hall’s Garden Pavilion, a rotund structure with an elegant and eye-catching roof.

Bowman Riley Architects’ unique design incorporates a funnel structure on the top of the roof that adopts a tight curved radius, to mirror the Garden Pavilion’s round form. This design therefore lent itself to a facade solution that could fit seamlessly against a tight curve and provide minimal protrusions from the outer face.

Careful consideration was given to selecting a finish that would remain sympathetic to the natural stone demands of local planning. Therefore, the architects chose a natural grey stone colour that would tie in with the traditional Yorkshire Sandstone Ashlar of the main build.

In line with the client’s commitment to reducing their environmental impact and continuously improve the environmental performance of their sites, the architects additionally looked for a sustainable product to clad the Garden Pavilion. 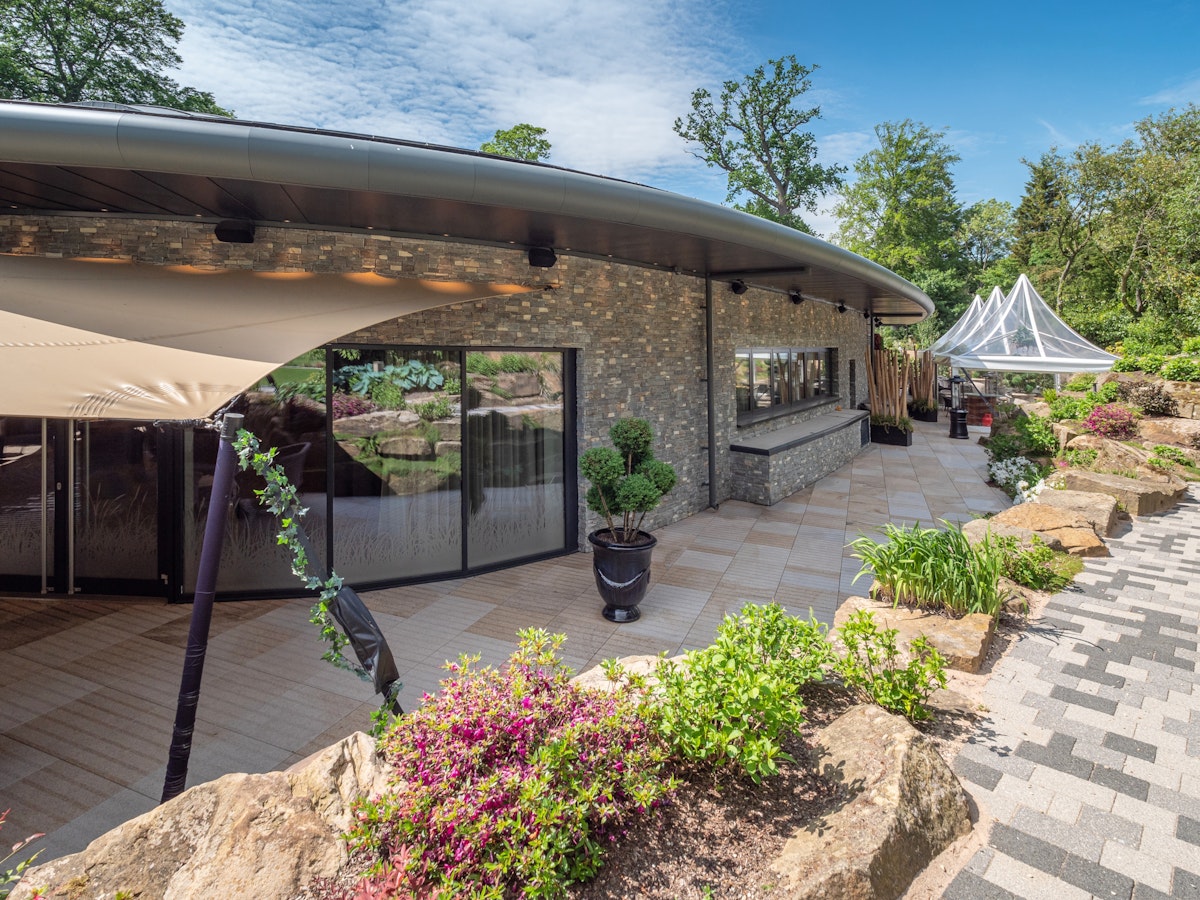 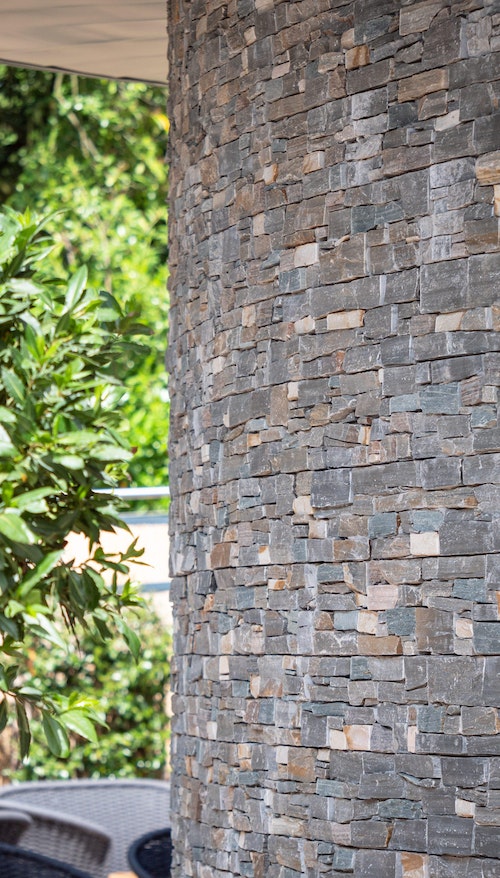 In partnership with Taylor Maxwell, Bowman Riley Architects specified STONEPANEL™ stone cladding in the colour ‘Nordic’, to provide a contemporary finish to the Garden Pavilion, whilst meeting the requirements set out during the planning stage. Expertly installed by HACS Construction, the range of curved stone units sit flush against the facades distinctive shape, creating a uniform exterior across the Pavilion.

Impressively, the overall scheme achieved carbon neutral status, with the installation of a ground source heat recovery system, an ultra-efficient plant room, high-performance aluminium fenestration and seamless double-glazing. As well as using energy efficient lightbulbs, a sustainable composite decking has been installed outdoors to ensure protection against staining, warping and decay, while benefiting from the timeless visual appearance of natural wood.

With Bowman Riley Architects, HACS Construction and all material suppliers based in Yorkshire, Grantley Hall is a tribute to the site’s long history and a celebration of local business. The restored building, which combines rich heritage and new contemporary designs, has come together to give guests a five-star luxury getaway surrounded by original 17th century features that make the setting so distinctive.

Grantley Hall oozes historic character and quality. After decades of inappropriate uses and vacancy, the multi-phase Grade II* listed mansion dating back to the 17th century has been lovingly transformed into a five-star hotel and wellness retreat. The painstaking restoration programme included extensions and new buildings designed to enhance the character and use of the site. The Japanese Garden is a jewel in the crown and was designated a Grade II Registered Park and Garden during the course of the project. 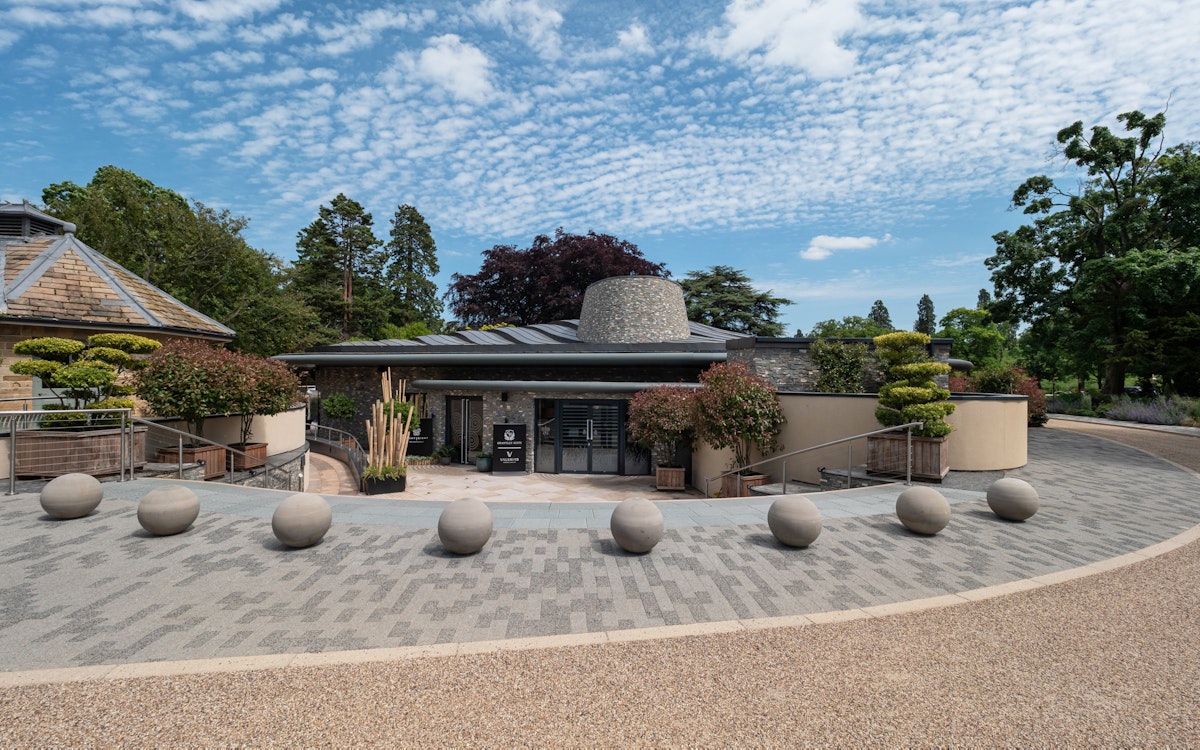 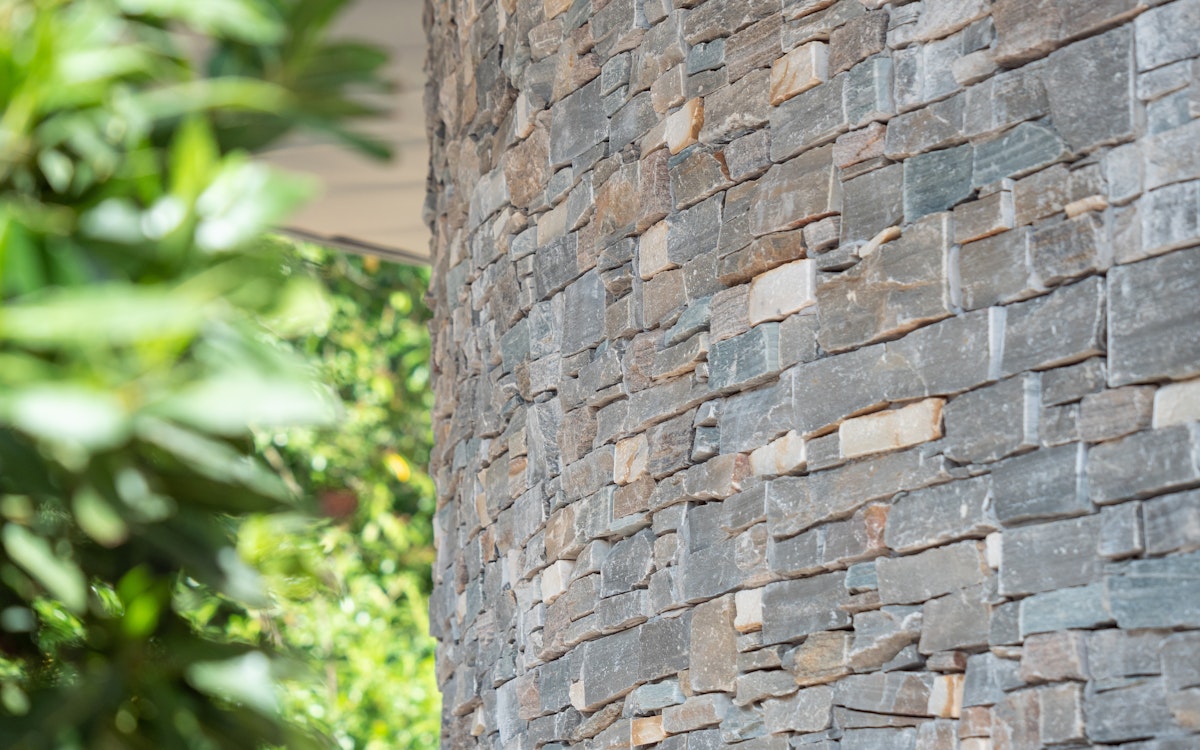 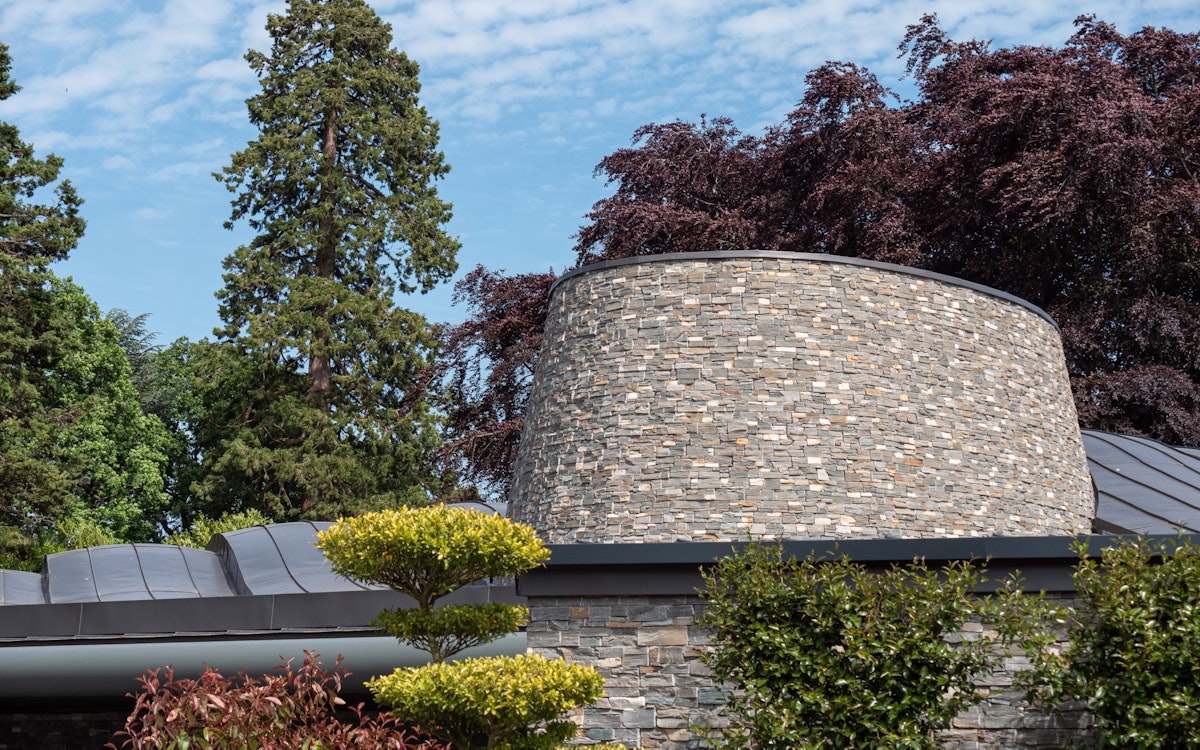 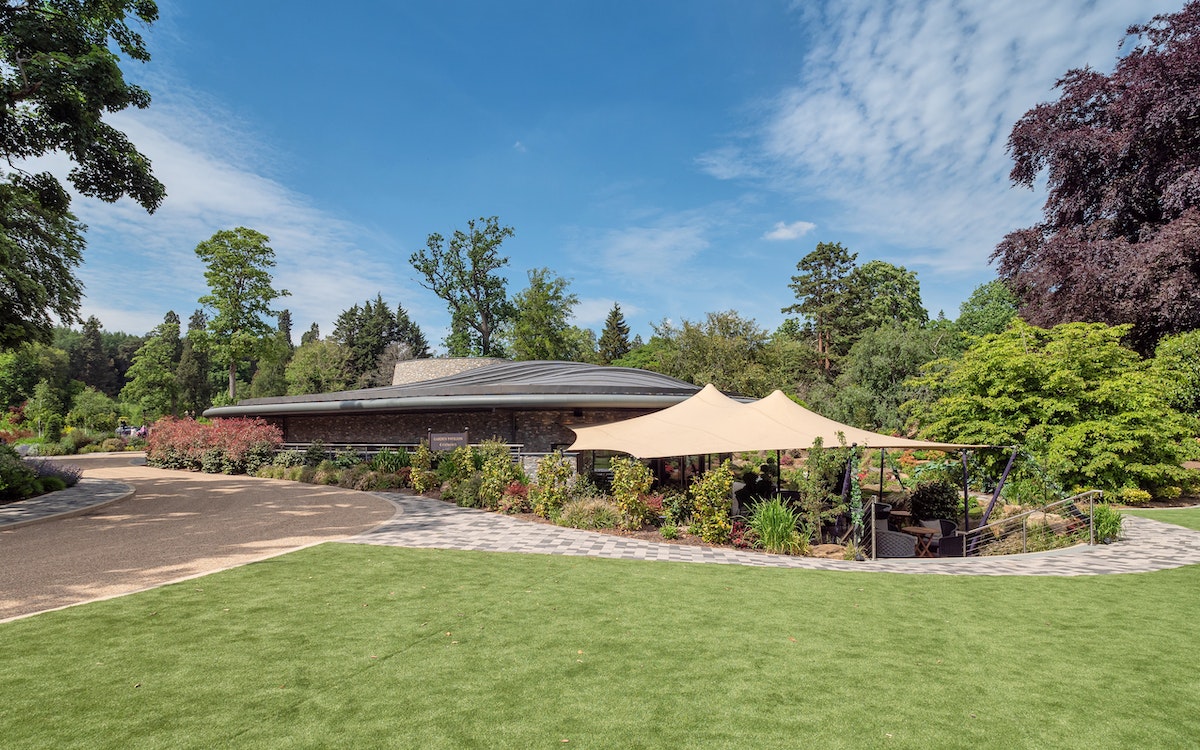 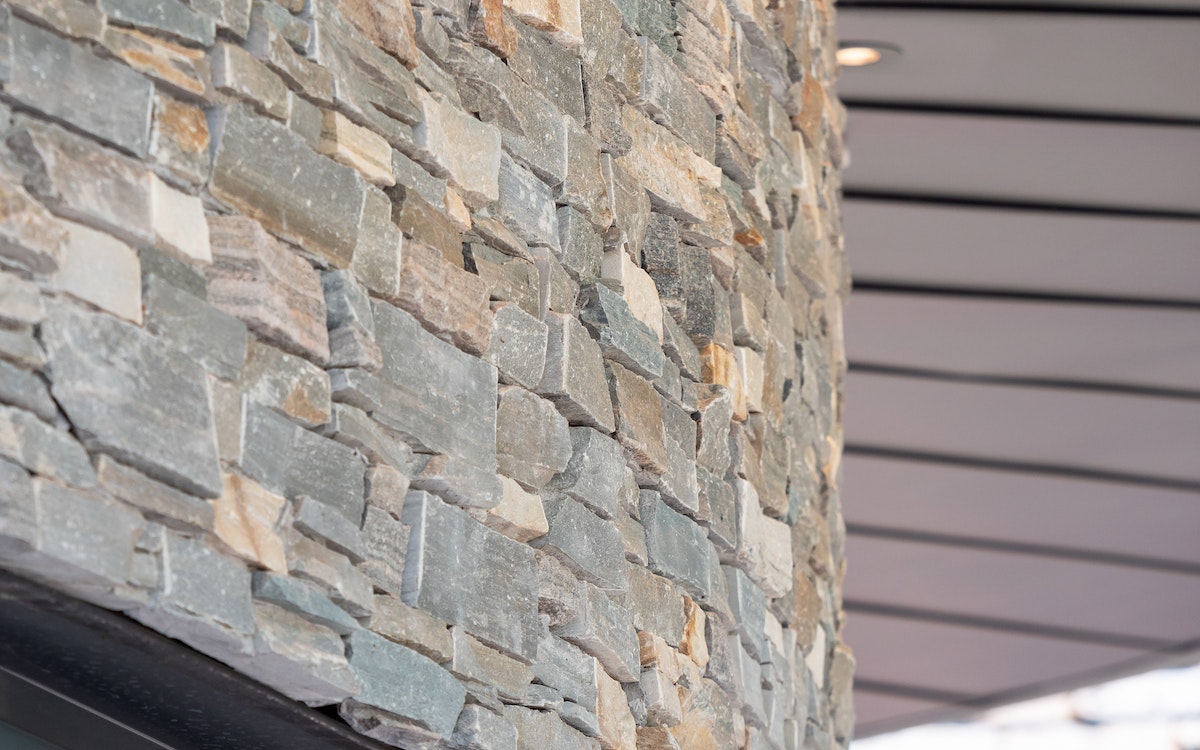