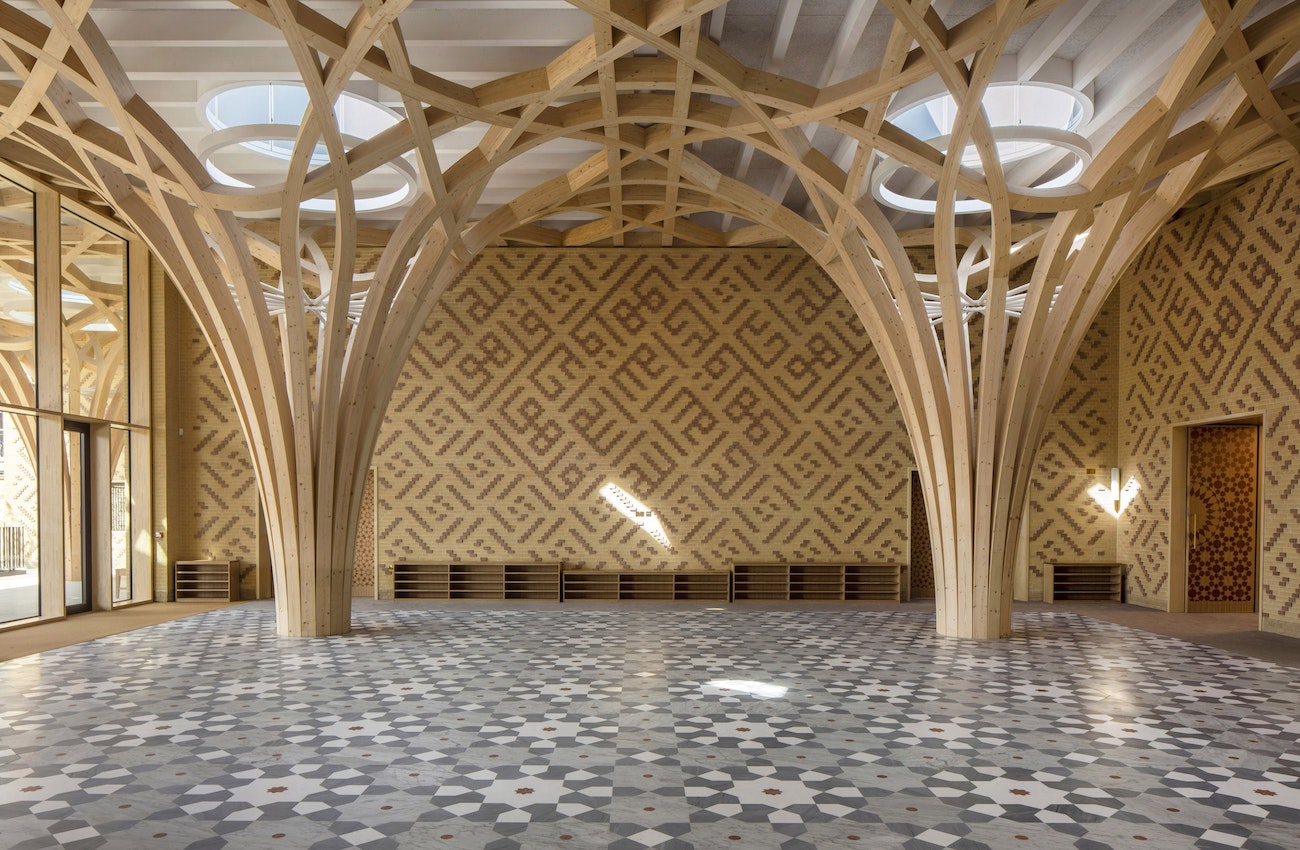 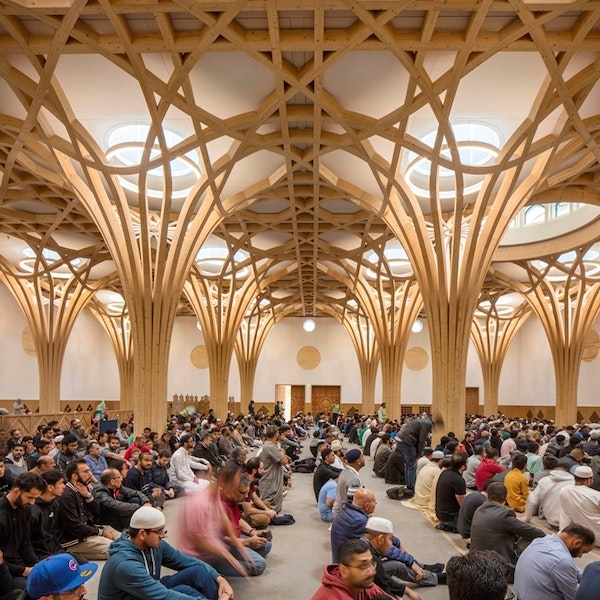 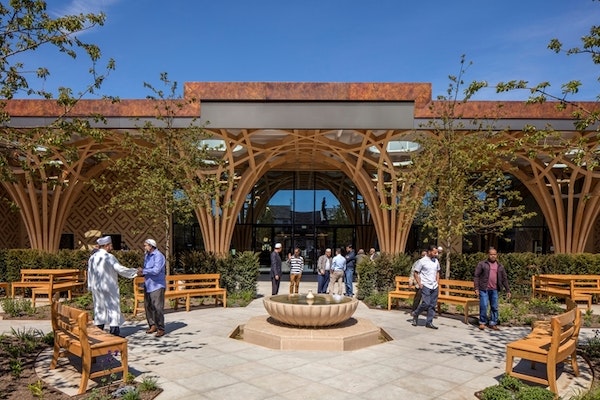 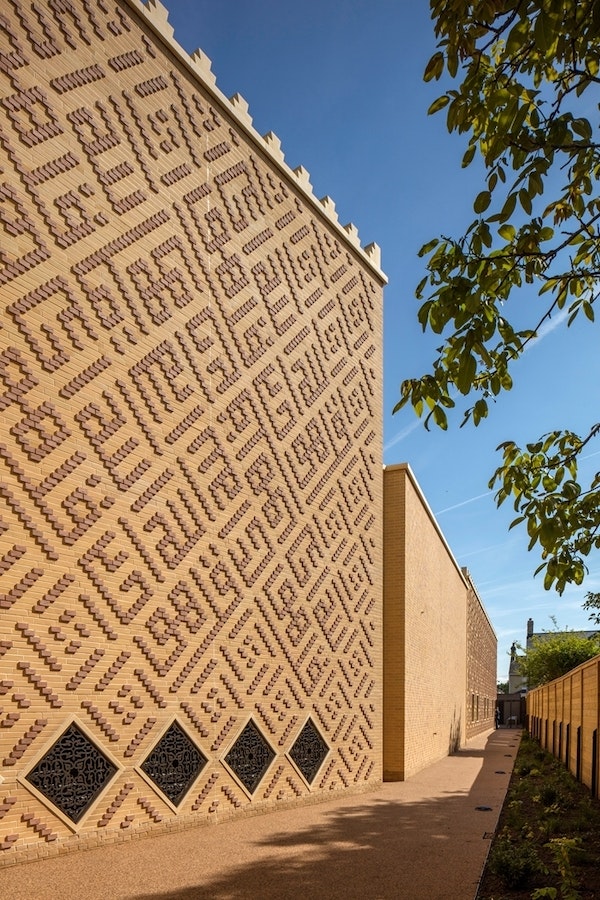 The defining internal characteristic of the mosque is the timber ‘trees’ which form the structural support for the roof and the rooflights. The geometry of the trees was developed through work with geometric artist, Keith Critchlow, creating the underlying geometry of the mosque. It combines an Islamic ‘the Breath of the Compassionate’ pattern into a structural grid that supports the roof and is then brought to a point at the columns. It is a simple device that combines the structural logic of supporting a large span with few columns and a celebration of the structural material and its decorative possibilities, bringing to mind both Fosters’ Stansted Airport, and Kings College Chapel.

The external brick tiles that clad the CLT structure are from traditional Cambridge Gault and red brick colours. The protruding headers form a pattern of Arabic Kufic calligraphy that reads ‘say he is God (the) one’.

Social and environmental sustainability were central to the competition-winning scheme and have been delivered. The intent was to produce a building that is in accord with the spiritual belief that humanity’s role is as a responsible custodian of nature and should minimise its carbon footprint. The building has achieved Net Zero Carbon energy on site in use. The competing elements of the demand for car parking to suit large events with elderly congregations, creating an underground car park and the environmental consequences of embodied carbon have been recognised. The passive and active sustainable measures incorporated within the building meet and exceed some elements of the RIBA 2030 targets and other elements of the design have future-proofed the building to allow for predicted climate change.

Material selection is exemplary, with the superstructure predominantly timber, low carbon concrete specified, and natural insulation resulting in minimal embodied carbon. The selection of Cradle to Cradle Certified products also demonstrates the conscious efforts to minimise the building’s impact on the environment.

Water consumption is also low, meeting the RIBA 2030 Climate Challenge target and confirmed by meter readings - in the water stressed area of East Anglia this is particularly important. The transformation of an impermeable surface to a building with green roofs to assist with local surface water runoff.

Post occupancy evaluation data shows in use consumption are within 15% of the energy predictions, which suggests a narrowing of the performance gap.

Central Cambridge mosque is a demonstration of how architecture can embody religious and cultural philosophy and traditions while utilising sustainable and contemporary materials. It is a building of evident programmatic clarity and function, where one of those essential functions is religious contemplation and delight. It has created a new, 21st century, non-denominational British mosque that is both specific to its place and time and which resonates with wider Islamic and religious buildings. To have achieved this in Cambridge, with its world famous tradition of structural expression in religious architecture yet without contrivance is a remarkable achievement.

Project Architect of the Year
Matthew Wingrove is a passionate advocate for the building. The client, Iman Sejid Mekic, who operates the building every day, clearly respected his professional expertise and evidently liked him too. That he was able to bring to fruition a building that picks up the original competition winning design concept and deliver it to its full potential is a testament to his capabilities and his dedication.

Client of the year – Cambridge Mosque Trust
To launch an RIBA international competition and select a design and a design team and carry it through to successful completion over the following decade is testament to the commitment and dedication of the client to producing a contemporary mosque for the 21st century and an enduring piece of architecture. In particular, Dr Tim Winter, Shaykh Zayed Lecturer in Islamic Studies, Director of Studies, Wolfson College should be recognised both for the scale of the ambition, for pursuing a mosque that sets a new environmental and inclusive benchmark, and for the Trust’s rigorous and steadfast approach to seeing it through to completion.

Find out more
The Byre and the Garrett

Find out more
The Water Tower